What if Lambeth could be as green, fair and delicious as you want it to be?

How do you envisage our consumption of fashion and music in 2030? What clothes do you see yourself wearing? What music do you imagine you'll be listening to? How will you access/purchase these?

We could have more free time to experiment and be creative.

Fashion industries prioritised self esteem and self expression by favouring bespoke clothing over standard sizing.

Citizens were framed as skilled makers rather than consumers who have to choose between set options.

On Wednesday the 28th of April 2021 we hosted a workshop to explore the delicious futures we would like to see unfold by 2030. Here is the discussion that came out of it : "If people are prepared to pay a little more, value their clothes, not throw their clothes away. If they are better made, they're made of quality fabric then it will be longer lasting." "I have this fantasy about an outdoor weekly soap opera written by local young people. There is something about local narratives [and] the idea of being able to create entertainment for ourselves and there being value in that rather than something that is mass produced and broadcast out. You don't take part in it in the same way."

"I would like different parts of the country to have their own musical styles [and fashion]. I would love it to be more hyper local. [?] I would love to see the idea of folk music, the idea of music for the people by the people to expand and for people to start telling stories [?] about that particular group of people." 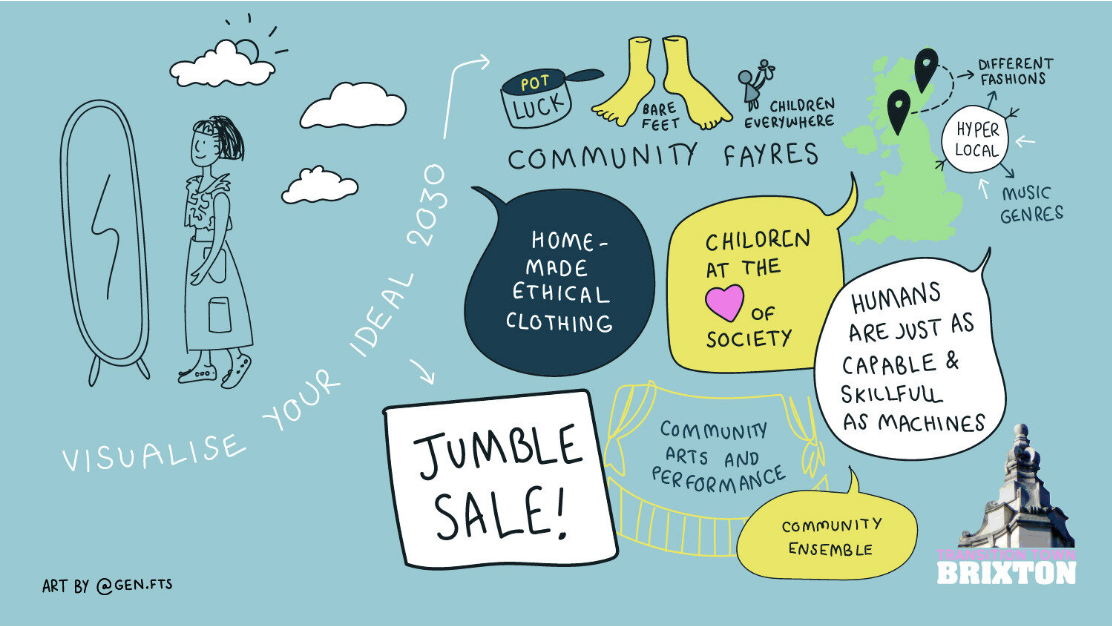 "A culture is the hardest thing to change yet it is quite easy. There is a lot playing on it but I think it is always about the willingness to fail. You only shift culture if you just keep trying. And you try, it's ok if it doesn't work. And then it [becomes] a culture of people doing it as an act of self-care and not with the aim of it succeeding but as something we are doing to be together. Once that is the heart of the thing and you do listen to the people that join in then you do have a fast shift in culture."

Join the conversation by sending us your vision for the future of Lambeth in writing, images, video or sound. What would your local community be like in 2030?

Get in touch with Transition Town Brixton if you would like to get involved. You can sign up to receive newsletters or website updates or to be on the TTB 'actives' email list.
MAKE IT HAPPEN >> http://www.transitiontownbrixton.org/category/get-involved/

The more people like you that volunteer, the more delicious visions we'll be able to gather. If you can give some time or skills to helping What If Lambeth? please sign up as a volunteer.